Jim sampling the air of freedom.

SO MUCH LAWN & ORDER


Conman who made £50m from fake bomb detectors out of jail early & says, he’s so broke his only possession is a lawnmower! 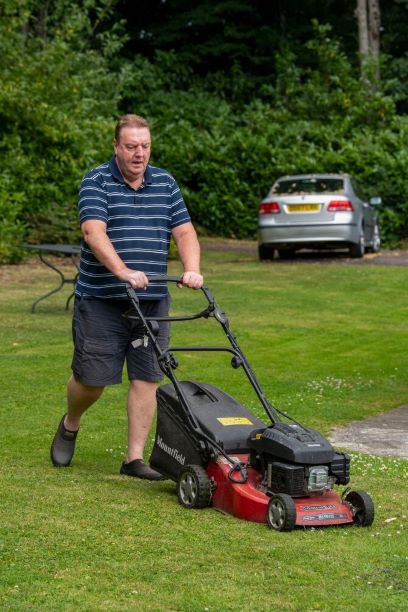 Could this be evidence of the only real work Jim has ever done? 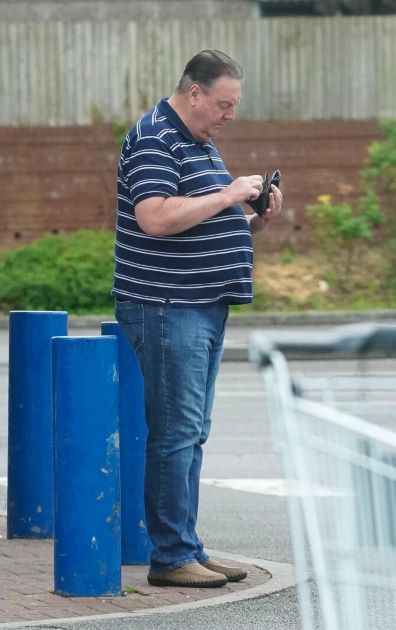 Jim looking very wistfully into the wallet that once held the means to any amount of extravagant luxuries. 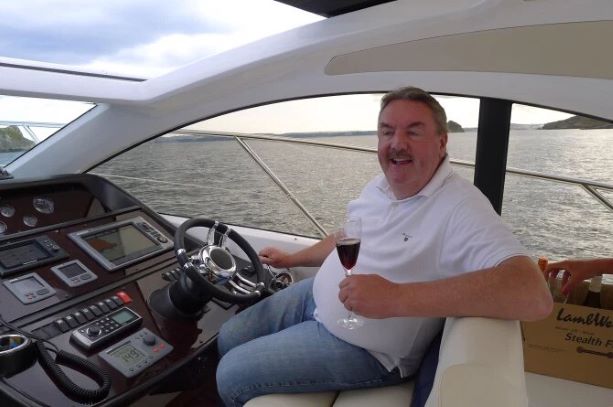 I know a lot of people who have lost everything in their life, none of them, and I mean absolutely none of them, then move into a £500,000 house in the country. I wonder how that is being financed, hard to think Jim has actually gone and got a real job that would cover the expenses of that house.

After 3 years in jail, McCormick is now £7.9 million lighter.

Today at the Old Bailey in London, the long awaited Proceeds of Crime hearing into McCormick's ill gotten gains was finalised. The result is that he has to pay into court, within three months, £7.9 million worth of cash and assets.
This shows how toothless the Proceeds of Crime Act is, the police estimated his total financial gain to be £21.3 million, so he walks away with £13.4 million, where is the justice in that?

For a full report please see the link below:

Whoever said, "Crime doesn't pay"?
Posted by Techowiz at 20:46 No comments:

ANOTHER ONE BITES THE DUST

Great news reaches us from Germany, at long, long last they have taken action against the fraudsters, Dave and Frank known as, Unival, maker and seller of the scam device the HEDD1. Followers of my blog will recognise this from our long running battle with these two scammers on previous posts, now the German authorities have arrested and charged them with, 47 offences, let's hope the eventual sentences reflect those dished out to our home grown fraudsters, McCormick and Bolton.
Below is the link to the marketing video for the fraudulent HEDD1, see it now before it gets removed:


Well done to my friend Peter whose tireless campaign against Unival, and those who must remain anonymous who have been instrumental in bringing this about.

Well worth coming out of retirement to report.
Posted by Techowiz at 19:25 No comments:

A conman who sold fake bomb detectors to Iraq has lost a challenge against his 10-year jail sentence.
Three judges at the Court of Appeal in London rejected an application by James McCormick, 57, of Langport, Somerset.
His application for leave to appeal against the sentence imposed at the Old Bailey earlier this year was thrown out by Lord Justice Davis, Mr Justice Nicol and the Recorder of Chester, Judge Elgan Edwards.

McCormick, a former policeman and salesman who was found guilty of three offences of fraud, was thought to have made £50 million from selling three models based on a novelty £13 golf ball finder to Iraq and other countries.

Giving the ruling of the court today, Judge Edwards said of the “callous confidence trick” carried out by McCormick: “The circumstances were quite appalling. The applicant knew precisely what he was doing.

“He did it for enormous profit and that conduct simply cannot and will not be tolerated.”

At the Old Bailey, Judge Richard Hone told McCormick, when imposing the maximum sentence: “I am wholly satisfied that your fraudulent conduct in selling so many useless devices for simply enormous profit promoted a false sense of security and in all probability materially contributed to causing death and injury to innocent individuals.”

The prosecution said there was no scientific basis to the detectors and they were nothing more than a con.

Judge Hone told McCormick: ”What you perpetrated was a callous confidence trick. The device was useless, the profit outrageous and your culpability as a fraudster has to be placed in the highest category.

”Your profits were obscene. You have neither insight, shame or any sense of remorse.”

The judge said McCormick had shown a ”cavalier disregard of the potentially fatal consequences” of his con.

McCormick, who until the end continued to maintain the detectors worked, is facing a confiscation hearing to recover millions of pounds.

He is believed to have sold 6,000 of his fake detectors to Iraq and 1,000 to other police and military forces including United Nations peacekeepers in Lebanon.

The Guardian brings to light the Government involvement in these frauds

Please read the excellent article by Rob Booth of the Guardian.

GARY BOLTON IN THE NEWS. 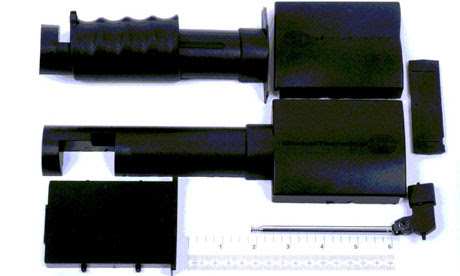 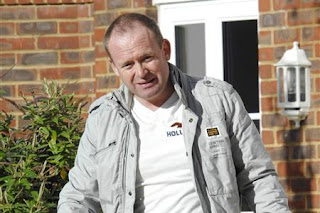 Gary Bolton (Picture Mike Gunnill)
A Kent businessman who made up to £3m a year from the sale of fake bomb detectors around the world has been jailed for seven years by a judge at the Old Bailey.

Gary Bolton, 47, hawked the bogus kit to military and police clients in countries including Mexico, Thailand, Pakistan, China, India, the Philippines, Singapore, Egypt and Tunisia despite it being based on a novelty golf ball finder.

The devices cost as little as £1.82 to make and were sold for as much as £15,000. They remain in use in Thailand, where human rights campaigners claim they have cost lives, and were only abandoned by Mexican agencies in 2011.

Sentencing him on two counts of making and selling an article for use in fraud over a period of five years, Mr Justice Hone said: "The culpability and harm of what you were doing is at the highest level because when used for the detection of explosives, in my judgment the use of the GT200, albeit in conjunction with other detectors, did materially increase the risk of personal injury and death."
Human rights campaigners in Thailand, where the devices were widely used by the army and police, have identified two fatal bombings that killed four people and injured more after the device was used to check suspicious vehicles.

Bolton's sentence follows that of his former business partner Jim McCormick, who was jailed for 10 years in May for selling around £50m worth of similar devices, many to postwar Iraq where their use is thought to have cost lives.

Speaking in mitigation, Jonathan Higgs QC said Bolton had three children, including a eight-month-old baby, and had been diagnosed with depression.

The court heard that branches of the UK government had offered some support to Bolton's enterprise, called Global Technical. They include UKTI, Whitehall's export sales arm, and the British embassy in Mexico, which from 2005 to 2009 offered support though introductions to potential clients and allowed Bolton's firm to use its premises for demonstrations.

"You have damaged the reputation of British trade abroad, having duped UKTI and other agencies dedicated to supporting the export of quality British goods as opposed to the dross that you manufactured," said the judge.

The jury heard that Bolton's devices were "nothing more than a box with a handle and antennae attached to it and pieces of plastic inside it".

The charges related to a period from 2007 to 2012, but Bolton began marketing the device in 2000 demonstrating it in Malta, Egypt, Uganda and South Africa.

In 1999 the Royal Engineers exports support team tested a version of the invention, at Bolton's request, but the army unit found it to be accurate only around 30% of the time, the court heard.
Bolton went on to doctor the reports to make them appear a clear vindication of the science he claimed was behind the device. A version of the report, seen by the Guardian, claims the detector "looks for the atomic structure of the substance and once located locks on giving its location". It "operates by the generation of static electricity within the body, which sets up a field around the searcher, activating the unit and making it attract to the substance".

Bolton claimed that his detectors worked with a range of 766 yards at ground level and from as far as 2.5 miles in the air and said they were effective through lead-lined and metal walls, water, containers and earth.

Bolton's sales pitch boasted of detecting explosives, narcotics, ivory, tobacco and even money. The prosecutor Richard Whittam QC told the jury when arrested in July 2012 Bolton "said he had no background in science, research, training or specifically security". During the trial Bolton called in his defence an expert in dowsing, a method of "divining" for water using sticks.

It has taken more than 16 years for the law to catch up with Bolton. Tests in 2001 proved the detectors performed no better than random in searches for explosives.
Posted by Techowiz at 14:10 1 comment:

Another fraudster bites the dust at the Old Bailey.
Gary Bolton, 'inventor' of the GT200 is to be re-united with his old friend and business partner Jim McCormick in jail.
Bolton was today sentenced to 7 years jail for his fraud, although why the difference in sentences is unclear.
Very well done to all those that brought this about.
Posted by Techowiz at 10:54 1 comment:

Techowiz
Fraud hunter, who hates people who make money at the risk to other peoples lives.